The Marie Lloyd mishmash of myths

I can't help it: I am massively irked when people go on reiterating some factoid that I have done the research on and know is misleading if not completely false. I am but one small pedantic voice, alas, and the false popular story is almost always a good deal simpler and more memorable than what happened, if anything actually happened at all.

There may well be even more myths about that famous music hall artiste Marie Lloyd that I haven't come across - I've encountered these in the context of censorship - or that have merely slipped my mind, but there are a couple that are extremely persistent and often circulated, that cannot be proved to have any solid basis. In at least one case the story is a dramatic exaggeration of the rather dull bureaucratic actuality, followed by the caution of music hall managements over what was permitted on stage.

Some responsibility undoubtedly lies with early biographers: Naomi Jacob, in Our Marie (Marie Lloyd): A Biography (1936) writes as one who did have a substantial personal knowledge of music-hall of the period, but was inclined to rely on anecdote without bothering to do any checking, while the narrative rambles chronologically in a somewhat frustrating fashion. This is, I suspect, where this particular tale originated:

Years ago, the Watch Committee, or the Morality Committee, or the Committee for Public Safety, or some such collection of prurient-minded old gentlemen, made a fuss about her songs.... She was ordered to appear... and allow this committee of old men to decide if those songs were fit for the ears of London and the provinces. (p.137.)

This begs a lot of questions. What authority would such a committee have to 'order' Our Marie to appear, and to, as Jacob proceeds to recount, perform several of her well-known songs for over an hour very pointedly in the blandest and most innocuous style, following up with a salacious rendition of popular Victorian parlour ballads? (The potential for invoking a lewd subtext in such works as 'Come into the garden, Maud', had been commented on at least as early as 1890 by a Mr GS Elliott in a speech condemning censorious attitudes to music-hall songs: 'Music Hall Gossip', The Era, 15 Feb 1890.)

The real-life event in question was the objection by the Social Purity Branch of the British Women's Temperance Association, represented by Mrs Carina Reed (not a prurient-minded old gentleman but a social purity activist), to the renewal of the license of the Oxford Music Hall, in the autumn of 1896. This was amply documented in the contemporary press, and surely if Miss Lloyd had been personally summoned before the London County Council licensing committee it would have been all over the papers. Lloyd's saucy song 'What's That For, Eh?' aka 'I've Asked Johnny Jones' was only one of the grounds upon which objections were being raised, which included alleged prostitution on the promenades and drinking in the auditorium. Lloyd was not present, but, and this is possibly sufficiently amusingly incongruous that one wishes history had been more attentive to the actual facts, the entire song, verses and chorus,  was read out by one Mr Baillache, on behalf of the Social Purity Branch of the Women's Temperance Association. He quoted these 'at length, so that the committee might better appreciate their purport', i.e. detached from any innuendo or 'business' that Lloyd might have brought in performance: indeed it is hard to envisage an innocuous reading of the song.* (Illustrated Police News, 24 Oct 1896, p. 6.)

The committee granted the licence, but conceded that 'greater care ought to be exercised in the selection of songs'. Music halls complied. As a result Marie Lloyd asked her songwriters for a new number: 'You Can't Stop A Girl From Thinking' (R. A. Baker, Marie Lloyd, Queen of the Music Halls, 1990, p. 69): 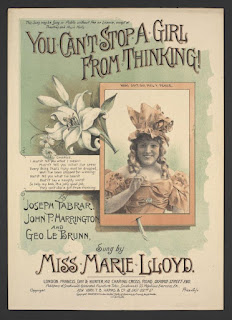 It is sometimes claimed that the song under contention in this case - or a song of Lloyd's that was objected to on some other occasion - had a line 'She sits among the cabbages [in some versions, lettuces] and peas' - or, as Jacob puts it, 'a song concerning the young lady who spent her quiet hours contemplating the vegetables in her garden'. On objection being raised - one version has Sir Henry Tozer (chairman of several music hall companies) storming into her dressing-room to complain - she inserted 'the name of another vegetable' (allegedly 'leeks') which 'didn't make the song any better from Sir Henry's point of view!' This seems particularly improbable when on the very same page Jacob mentions Lloyd's protesting another artiste's song as 'rude... It's a --lavatory song, that's what it is'. (p. 196)

Endeavouring to trace any song with these actual words, whether or not being performed by Marie Lloyd has proved somewhat difficult. It is widely quoted, yet Daniel Farson in Marie Lloyd and Music Hall (1972) reports Lloyd's sister Annie denying that she ever sang such a song and that Macqueen Pope (the theatre historian) agreed that although she was reputed to have sung a song about a market garden 'nobody has yet been found who heard her do so'. Farson says that on his advertising for reminiscences and memories of Lloyd in 1964 an elderly lady claimed that she had gone with her then fiance, before the First World War, to the Oxford Music Hall, and had seen Lloyd who sang this shortly after she had been 'taken to task by the censor... for a song in which she had gone into the garden and "pea'd".' (p. 68-9.) Farson saw 'no reason for disbelieving her' but it does not seem conclusive.

There was a song of this or similar title but it seems associated with US vaudeville: 'Sits Among the Cabbages and Peas' appears under 'Parodies on Popular Songs' in an advertisement, ? early 1900s, for The Vaudeville Prompter #4 in Plays of the 19th and 20th Centuries Vol 27: this is unfortunately a very obscure publication of which copies have not yet been traced. Further mentions of the song have been found in reports such as 'Charley Stephens sang his favourite solo entitled "She sits among the cabbages and peas"', at a party held by the Onion Club, reported by The Silver Standard, Silver Plume, Colorado, 21 May 1904. Naomi Jacob referred (in scathing terms) to the 'American invasion, when every second-rate artiste in the United States was dumping inferior rubbish in the music-halls of England' (p.138), so it is possible that if it was featuring on the British music-hall stage it was from that direction. Possibly there were objections made as in the story, and these got attached to the much better-known Marie Lloyd (a syndrome one sees with 'inspirational' quotations attributed to noted wordmongers who would die of embarrassment if they knew).

But what these stories do, even though inaccurate in their details, is celebrate Lloyd's defiant spirit - although she complies with the censors, it's very much a malicious compliance obeying the strict ruling while undermining it. It is the spirit that, when she was humiliatingly not included in the Royal Command Performance in 1912** (to general shock and scandal), had special strips pasted across the posters where she was performing declaring 'Every performance by Marie Lloyd is a Command Performance. By Order of the British Public' (Farson, p. 96).

* Derek B Scott refers to 'the gestures, winks, and knowing smiles that she employed to lend suggestiveness to apparently innocent music hall songs, like “What’s That For, Eh?”' but the suggestiveness seems transparent in the words ('Music Hall: Regulations and Behaviour in a British Cultural Institution', Muzikologija 2019(26)).

** Baker suggests that her omission - at a time when she was one of the most popular artistes of the day - was at least partly to do with her vigorous support for the 1907 Music Hall Strike (p.120).

Lesley Hall
London, United Kingdom
Retired former archivist at the Wellcome Library: now a Wellcome Library Research Fellow, and Honorary Associate Professor, Department of Science and Technology Studies, University College London: also a historian who has published several books and numerous articles and chapters on issues to do with sexuality and gender in the UK in the 19th and 20th centuries. She has subsidiary interests in the history of women in science and medicine, interwar middlebrow women novelists, and science fiction and fantasy. She considers herself a feminist. Twitter @erinacean This blog went, not particularly intentionally, on hiatus in 2017 for various life-related reasons. I am now intermittently posting again, if only to do something about recording various weird research rabbit-holes I've been down that don't feel like part of any larger projects.