There's not much on it yet, because this is still a pretty new and underdeveloped project, but I've created a page on the website for my work in progress on Interwar British Progressives  (I've also, talking of the website, added a number of new references to Literary Abortion).

I haven't yet produced much arising from this project, but I have been doing a certain amount of archival research, and as I noted in my very preliminary thoughts on what the progressives were about in my Porter Lecture last May, they were about things like a healthy society and planning for the people and public amenity, so I was really interested to see this piece in today's Observer about Green Belts.

Certainly the progressives, who were all about the rights of the people to roam in the countryside, the stopping of the curse of 'ribbon development' and urban sprawl, and the ability to access green areas by public transport, would I think have been horrified if the legislation now turned out to be favouring the rich (given the attacks on private land-owners and such actions as the Kinder Scout Trespass) and affecting the availability of housing. This was the very reverse of what they hoped would be achieved by the Labour-controlled London County Council of the mid-1930s designating the London Green Belt, as praised in an editorial in Plan for World Order and Progress: A Constructive Review, the journal of the Federation of Progressive Societies and Individuals.
Posted by Lesley Hall at 15:26 2 comments:

To commemorate the achievements of women in STEM today, I thought I'd mention two women who are perhaps not among the most well-known of women in science in spite of their significant achievements.

Elsie Widdowson spent 60 years in a fruitful collaboration with Professor R A McCance, working principally on questions of nutrition. Together they were responsible for inaugurating Standard Food Composition publications with their 1940 Chemical composition of foods, and were also extremely influential on World War II rationing policies. They and their research team went to the Lake District and self-experimented, trying the various recommendations for adequate nutrition and then going fell-walking to test them. Widdowson continued to be research active into her 80s. 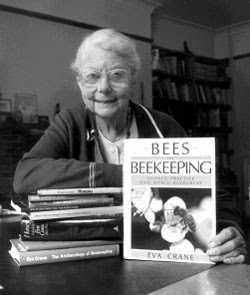 Her sister, Eva Crane, although she initially studied physics, achieving a PhD in the subject when women in physics were very rare birds, and even being appointed a university lecturer in the subject, became a world-renowned authority on bees and apiculture following the gift of a hive as a wedding present. She similarly remained active into her 80s.

A draft letter by Widdowson in the McCance/Widdowson papers in the Wellcome Library suggests that they had an unusual background in that their parents were Exclusive Brethren.
Posted by Lesley Hall at 10:48 No comments:

Email ThisBlogThis!Share to TwitterShare to FacebookShare to Pinterest
Labels: women in science

Twitter is a limited forum for discussing 1920s contraception

Further to an exchange on Twitter apropos of (didn't see this, only reported) instance in Downtown Abbey of an unmarried upper-class woman getting herself fixed up with contraception before having a fling. Well, not entirely improbable, but I really don't think she would have been sending her maid (even if she trusted her implicitly not to blackmail her further down the line) to procure the necessary.

The most reliable form of contraception for women being advocated by e.g. Marie Stopes, and indeed the rest of the UK birth control movement, was the female occlusive rubber cup, and while there were controversies between Stopes's pet high-dome cervical cap and the Dutch cap (diaphragm) that other clinics thought women found easier to fit, it still had to be fitted by a trained nurse or doctor and this was hardly something that a maid could undergo on her mistress's behalf. What the lady in question needed was one of the discreet Harley Street specialists unconstrained by the requirements of the various voluntary clinics to ascertain that all their clients were respectably married. There would, however, be practicality issues around fitting a woman who did not have former sexual experience.

There were other possibilities: W J Rendell's 'The Wife's Friend' quinine pessaries were widely advertised (though without ever explicitly stating what they were for and why they were the wife's friend) in the most reputable women's magazines. However, this is an under-researched (and possibly impossible to research) area of contraceptive practice - the oral histories studied by Kate Fisher in Birth Control, Sex, and Marriage in Britain 1918-1960 and by her and Simon Szreter in Sex before the Sexual Revolution are silent on the topic. However, there is evidence that this was a profitable line, and Rendells were incensed when the National Birth Control Association (later the Family Planning Association) found them not meeting the standards of efficacy and safety necessary for inclusion on their Approved List of contraceptives, pointing out  that they were widely used by numerous (they claimed) entirely satisfied customers (documented in the FPA archives in the Wellcome Library). Quinine, however, is only weakly spermicidal, although the greasy medium used as a carrier did have some effect in slowing sperm motility. But anyhow, these would not have been a particularly reliable expedient.

The really sophisticated cosmopolitan woman might hear about and resort to one of the early forms of intrauterine devices that had been around since the early 1900s, principally the Grafenburg ring, named after its deviser. There was, allegedly, only one doctor (and to no-one who knows anything about these issues surprise, it was Norman Haire) in England who would fit them, and he charged the kind of rate that that commanded, to the extent that at least one woman (the bohemian writer Ethel Mannin, as stated in her correspondence with Douglas Goldring) found it slightly less expensive to travel to Germany and be fitted by Grafenburg himself. Mannin was a great advocate for this method even while conceding that the process of fitting it was the reverse of fun and might even require local anaesthesia.

I find it hard to suppose that the maid's errand would have been to purchase condoms to be discreetly handed over to the partner at an intimate moment. This does not seem a likely scenario for the period.
Posted by Lesley Hall at 10:29 6 comments: