There has been a lot of jeremiah polemicising following the recent dismissal of a jury for failing to reach a conclusion after asking what were reported as questions displaying a disastrous lack of understanding of the process, and certainly this episode did not cast a glorious light on this great British tradition.

However, it did make me think of those cases in which juries reached a conclusion perhaps rather different from the one they were expected to, and indeed was possibly considered desirable, in certain historic trials over issues of obscenity.

Possibly the verdict that Knowlton's birth control tract Fruits of Philosophy was indeed calculated to deprave public morals, but that Charles Bradlaugh and Annie Besant had had no corrupt motive in publishing it in 1877, was a somewhat spurious compromise. However, in a later birth control case, that of Henry Young, prosecuted under the Post Office Act in 1891 for sending out Malthusian pamphlets, a note on the file in The National Archives records official relief that the case was dealt with in the magistrates' court, rather than brought before a jury, because it was the kind of case where juries tended to sympathise with the defendant. It may be noted that the case against Radclyffe Hall's The Well of Loneliness (1928) was heard before a magistrate who refused to admit any of the line-up of potential defence witnesses.

However, in the 1942 case of the prosecution of Eustace Chesser's marriage manual Love without Fear and the even more famous 1960 prosecution of Penguin Books for publishing a cheap paperback edition of D H Lawrence's Lady Chatterley's Lover, gambling on the likelihood of the jury being impressed by the sincerity of the defendant or bringing healthy demotic commonsense to bear undoubtedly paid off in not-guilty verdicts.
Posted by Lesley Hall at 15:40 No comments:

Further on Project getting out more

This week I managed to get to the IHR Life-Cycles seminar (which was rather distressingly thinly attended, I wonder why this was?), Ishita Pande, (Queen’s University, Ontario) talking on 'Sorting Boys and Men: Unlawful Intercourse, Boy Protection and the Child Marriage Restraint Act in Late Colonial India', with particular reference to the 1929 Act passed by the Legislative Assembly brought into being ten years earlier by the Government of India Act (and thus not simply a top-down imperialist measure). Whereas the earlier debates on and legislation to do with child marriage had been about the protection of girls and women (and the child-widow problem) this act incorporated the concept of boys as also in need of protection. While Pande indicated that the act was relatively ineffective (because of the importance of child-marriage within the broader joint family system) with fairly few cases brought under it, and these tending to deploy it for other agendas, she suggested that it reflected a shift from concerns specifically to do with the protection of women to the idea of children and childhood in general as a protected zone.

On Friday I managed, for the first time in rather a long while (since these usually take place on working afternoons), to get to the Critical Sexology seminar at Queen Mary University of London, on Sex and Pedagogy.  This included three fascinating presentations on the theme, ranging from the use of erotica to convey advice and safer sex messages, via pedagogical techniques for providing safe spaces for sex positive sex education to young people, to teaching sexually-charged material in the university classroom. (Live-tweeted). This was a thought-provoking afternoon which generated many thoughts and questions, and there was much lively and provocative discussion.

The rather occasional good news about historical sources

A nice post in The National Archives blog on Documenting LGBT history across the UK - which is as much about bringing things into visibility within existing archives as generating new sources such as oral history. A bit miffed that they don't mention the Wellcome!

Not archives, but rare books: Kerala State Central Library: Rare Books Online. These look like very much the kind of things that are very difficult to find.

Though, while I'm delighted the researcher found it: Found: 500-year old wanted man warrant for Machiavelli, the Florence State Archives are pretty much the place that one would start looking, surely ! How lost was this item, or was it just a case of going through files and files of unindexed early C16th warrants?
Posted by Lesley Hall at 21:37 No comments: 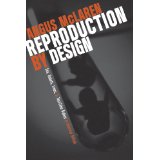 I am woefully behindhand in writing up this book, which is very much the kind of fascinating and very accessible read we have come to anticipate from McLaren. It pulls together a number of concerns of the interwar era, predominantly in the UK, demonstrating the influence of underlying issues around reproduction, and the allied areas of sex and gender, in a range of fields not normally seen as connected.

McLaren plausibly suggests that alongside clearly speculative science fiction texts, social theorists and commentators and those producing programmes for action that should also be considered as creating 'science fictions' based in ideas about the possibilities of science and anxieties around modernity.

While eugenics in the interwar era has been the subject of much heated debate, McLaren presents us with a compelling case that broader and less focused anxieties around reproduction, population, its quantity and quality were pervasive and popping up in places where perhaps they would not be expected. It also provides a new take on the responses to 'modernity' more generally during the same period. He makes the important point that even proponents of apparently conservative agendas were not so much restoring an ancient order as creating a new one along the lines which appealed to them, however rhetorically based in notions of tradition and conservation.

As well as speaking to existing historiographical debates around science, reproduction and breeding, it also constitutes a work which scholars of science fiction, particularly British science fiction, could usefully study. I think it was Brian Aldiss who suggested that post-World War II British sf was haunted by images of senility and sterility in the era of the end of Empire. McLaren's work suggests that this theme already pervaded the British imaginary well before then.
Posted by Lesley Hall at 15:46 No comments:

Project getting out more

In the past couple of weeks I managed to get to two excellent seminars at the Institute of Historical Research.

I don't think I've ever been to the Sport and Leisure History seminar before, but was tempted by Michelle Johansen's 'Good Feeling and Brotherliness: Leisure, the Suburbs and the Society of Public Librarians in London, 1895-193', which turned out to be extremely interesting and evoked a lot of fascinating questions. The cultural place of the oft-stigmatised 'suburbs' is surely overdue for historical re-evaluation, and the public librarians discussed by Johansen were pivotal figures in creating vibrant cultures of leisure and recreation both in the areas in which they were librarians and in their professional association. Their class origins were also fascinating: the kind of lower-class self-improvers for whom public libraries were intended, though with what appears to have been a significant degree of status anxiety, such as tweaking their family backgrounds a notch or two higher on the social scale.  A downside to this group, however, was that they had all achieved the pinnacle of their profession (i.e. head of a London or metropolitan borough library service) at relatively young ages (late 20s/30s) and basically had nowhere further to go - it was not a jumping-off point for other areas of librarianship - so they tended to stay there blocking opportunities for more recent incomers to the profession. I also had a slight cavil with the notion that public library users were either recreational readers or earnest self-improvers - I think it probable that those are two reasons for using libraries that could have been combined at different times and in varying proportions in the same individual.

I have more often been to the Life-cycles seminar in which last week there was a riveting paper by Hilary Marland (even though I missed the beginning due to a confusion over rooms in Senate House and nearly ended up at the Latin-American seminar by mistake), 'Managing Health, Managing Behaviour: Health and Girlhood in Britain, 1874-1920', which brought a good deal of nuance and complexity to ideas around girlhood, exercise, and health at a time of rapid social change and new roles for women. She demonstrated that while there was a good deal of concern expressed about the dangers of new forms of sport being indulged in by the adolescent girl there was also a new paradigm of the fit and healthy young female body being contrasted to the fainting wan mid-Victorian specimen and fitting in to the wider fin de siecle anxieties about national fitness.

I thought that I had, regretfully, due to work commitments, had to miss a paper on Anna Freud's war nurseries and their influence in the Psychoanalysis and History series, but in fact that is not happening until next month.

Getting the ladies fixed

Disturbing rise of the G-spot jab: It's the latest cosmetic treatment that promises to pep up your sex life. But, warn doctors, it could do exactly the opposite. Reported in, believe it or not, the Daily Mail and discovered through the good offices of Dr Petra Boynton, whose sensible comments are cited in the course of that article.

Thinking more generally about medical attention to the female genitalia, I was reminded that I never reported here on Peter Cryle and Alison Moore's Frigidity: An Intellectual History (2011), which I read and enjoyed last year, but never got around to posting on, as this was more or less concurrent with the final throes of getting the completed ms of Sex, Gender and Social Change in Britain since 1880 (MK II) out of the door. Although it doesn't have much to say specifically on the UK, it's a very useful study of a relatively complex history, and attentive to the different genres within which 'frigidity' got represented/presented as a problem/theorised, etc.

A particular association with the above news report was their extensive, highly nuanced and sympathetic discussion of Freud's disciple Marie Bonaparte, who famously underwent an operation to relocate her clitoris in a search for 'orgasmic normality'.
Posted by Lesley Hall at 20:43 No comments:

I noted (but could not find much more detail about) Stella Browne's 1933 remarks about 'the increasing and already valuable contributions to distinctively modern thought and art' being made by 'the coloured races'.

Recently came across in Evelyne White's Winifred Holtby As I Knew Her (1939) allusion to Holtby's interest not merely in the 'colour question' in Africa but the various literary, artistic and musical developments in the USA - 'all the eager self-expression and adventurousness of the young American negro writers and dancers and painters... there is hope in it'.

This would pretty much have been around the time they were in contact with one another, and, presumably, sharing ideas and discoveries.

Should still like to know more about this.
Posted by Lesley Hall at 13:57 No comments: