An original misreading of the Labouchere Amendment

In spite of the amount of historiography there now is on homosexuality in C19th Britain and the ways it was controlled and policed, one still comes across people asserting that the 1885 Labouchere Amendment to the Criminal Law Amendment Act 'made homosexuality illegal' (even though male-male sex had been a capital crime until 1861 - with the last actual executions taking place in 1834 - when life imprisonment was substituted under the Offenses Against the Person Act).

But this is in entirely new realms of misunderstanding the Amendment: 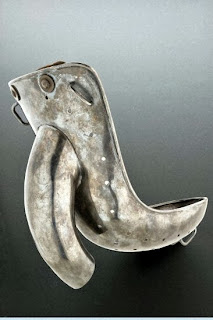 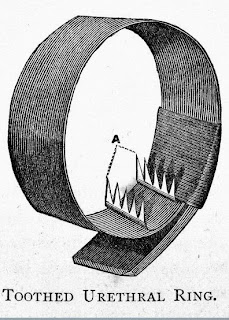 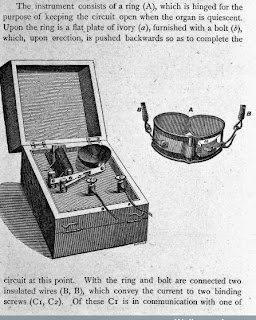 Perhaps the author of the article believes that the law mandated the imposition of similar preventive devices upon conviction?
Posted by Lesley Hall at 22:06 No comments:

A version of this talk will be reprised at an event at Barts Pathology Museum, 18 Feb 2014, details tba

'“Send in the Clones”? Naomi Mitchison (née Haldane)’s Musing on Reproduction, Breeding, Feminism, Socialism and Eugenics from the 1920s to the 1970s', Cambridge Interdisciplinary Reproduction Forum Mon 4 No, 5 pm
Posted by Lesley Hall at 20:50 No comments:

I have fallen sadly behind in writing up my reading of recent months, but hope to repair this omission. Starting at perhaps the wrong end, i.e. the most recent book bearing on my general research interests read.

Lucy Bland's long-awaited follow-up to her classic and pioneering Banishing the Beast, Modern Women on Trial, does not disappoint. While some of the material may be familiar from the various articles and chapters she has previously published, this is not just one of those volumes which appear to consist of lightly-edited articles put together within one cover, and with the gentle reader apparently expected to draw out the connections between them. It is  a very good thing to have Bland's insights altogether in one volume and not to have to chase up  the original articles, but this book is a good deal more value-added than that. Modern Women on Trial effectively links the matter in the separate chapters together throughout, not just in a brief covering introduction or conclusion, by emphasising the common themes and threads that join these scandals and causes celebres of the period 1918-1924.

It is a very good read: I was reading it in the interstices and the aftermath of a fairly intense conference but still found it compellingly engaging.

The various cases dealt with are the Maud Allan 'Cult of the Clitoris' libel suit against the sleazoid journalist Pemberton Billing; the flurry of concern, focusing around the drug-related, or allegedly drug-related, deaths of two young women, the actress Billie Carleton and the dancer Freda Kempton, over 'white women' associating with 'Chinamen' as well as narcotic use by women; the well known trial of Edith Thompson and Freddie Bywaters for the murder of her husband; the shooting of her Egyptian husband by Madame Fahmy; and the extraordinary convolutions of the Russell divorce case. Several of these have been the subject of rather sensationalist popular accounts, but Bland provides a deeper analysis of the responses to these cases across a range of voices, and the resonances with wider social concerns of the time, in particular the changing roles of women, the allure and the threat of modern life, and the continuing impact of  the Great War upon British masculinity.

Yet more depressing news about a major library of a major educational institution selling off rare historical items for short term profit: The Director and Trustees of the University of London’s Senate House Libraries are proposing to sell copies of the Library’s first four Shakespeare folios

This is a very disturbing trend: what next, cherry-picking over collections of archives for letters signed by Famous Names that can be flogged off as autograph letters for immense sums? That's really not what care of a collection means.

It seems particularly egregious in the above case since Sterling provided an endowment when leaving his rare book collection to Senate House. As an archivist I thoroughly concede that cataloguing, storage and general collection maintenance are not insignificant invisible costs to accepting a collection. And that potential bequeathers should probably engage in discussions with the place they're intending to leave their stuff before they write the will. But Sterling appears to have done the right things.

Nor can I imagine that these folios are somehow not a good fit with the Library overall. I have certainly come across instances of collections in places which are perhaps not the most appropriate home - where they are one-offs, isolated from related special collections. The importance of the synergy between related materials cannot be over-estimated. Thought should always be given to whether a given repository is really suitable for any particular collection. But the Sterling Library at Senate House is 'an unusually integrated resource for research on the transmission of English literary texts from the 14th century to the present day.... an acknowledged international resource in its area'. How getting rid of well-known gems of the collection will add to its reputation I cannot imagine.
Posted by Lesley Hall at 10:23 No comments:

Women's Histories: the Local and the Global IFRWH/WHN conference 2013

There was a plethora of panels in a wide range of parallel strands, three excellent plenary lectures from Catherine Hall, Jacqueline van Gent, and Mrinalini Sinha providing much food for thought, and a concluding roundtable discussion: 'After the transnational turn: what future for nation-based histories of women?' There were also good informal discussions over coffee, tea, and lunch (and I really must praise the catering, even if there weren't any peppermint tea bags). A very rich experience altogether.

The big take-home thoughts were the complex 'entangled histories' that bring together the local and the global, that very specifically located micro-histories can illuminate transnational issues, and that bringing new actors into the narrative produces, or should produce, a new history with an altered perspective.

With 9 strands over 9 sessions there were surely many wonderful papers and discussions that I missed. However, I did get to a very exciting panel on 'Disentangling evangelical missionaries: gender, sexual and domesticity in globalised localities', the one on 'Prostitution in comparative perspective' (despite the loss of one speaker, this worked very well), and the extremely stimulating one on 'Art and the Making of Cosmopolitan Identities' which provided me with a lot of things I need to follow up. I had hoped to attend the 'Gendered professions, gendered challenges' panel but two speakers had had to cancel, so went to 'Imperial webs and the influence of women', in which I was particularly interested in the paper on female missionary doctors.

My paper on Stella Browne as an internationalist featured in the panel on 'British women internationalists at home', and I found Ruth Davidson's paper on the Women's International League for Peace and Freedom in Croydon raised some issues particularly pertinent to my own current interests. I was, however, feeling rather thwarted at being scheduled at the same time as the panel on 'Mixed-race children and their mothers' including Lucy Bland talking on GI babies after World War II, not to mention that there was also a panel I should have liked to have heard on feminist campaigns against licensed prostitution in the same slot. Always a problem with stranded conferences.

The panel 'Cultural exchange and imperial power'  continued the theme of complicating the missionary narrative. 'International political and cultural exchange among women: Australia and beyond' demonstrated yet again what very exciting work in this area is being done by Australian historians and what large questions it raises. Australia also featured in the very well-attended panel on Sunday morning that I chaired, 'Between Britain and Australia: transnational women's lives': with a very nice paper from Emma Robertson on British skilled women workers from Cadburys going out to Tasmania in the 1920s when the British chocolate firms set up a factory there, and one from Rebecca Jennings on the quite complex cultural exchanges involving Australian lesbians coming to London in the 1970s - this perhaps counter-intuitively revealed that the British women's and gay and lesbian liberation movements of the period were less important than encounters with other Australians passing through London, and with newly available publications from the US movement.

The social side of the conference included two receptions, and a conference dinner at the very impressive Cutlers' Hall.
Posted by Lesley Hall at 21:14 No comments: