Eras are ending all the time, and new ones starting

To anyone who has been keeping up (not that I'm sure I'm entirely kept up, because these things are developing all the time) with the historiographical area of 'Soho Studies', so ably undertaken by Frank Mort in Capital Affairs: The Making of the Permissive Society (2010) and Judith Walkowitz in Nights Out: Life in Cosmopolitan London (2012), the gloom and doom in this article: The slow death of Soho: farewell to London's sleazy heartland: For years, relentless gentrification has been squeezing the life out of the infamous district. The closure of Madame Jojo’s feels like the nail in its coffin feels not just like same-old-same-old, but actually rather ironic.

In particular, in its invocation of some kind of traditional Soho embodied in 'the old rogue' Paul Raymond, it places a figure who himself, as Mort has so ably elucidated, was instrumental in bringing about the end of a previous era of Soho, as the keeper of a heritage he himself did much to destroy.

Perhaps, however, the glory days of any subculture are never in the present, but always in some moment that has just fleeted past and been missed: in a telling little essay on bohemia and the bohemian, Elizabeth Wilson invokes the following quotation:


“Bohemia is always yesterday,” wrote the American writer Malcolm Cowley, a bohemian himself, as long ago as the 1920s.

As writers on nineteenth and twentieth century bohemianism have commented - and were, as this line by Cowley shows, in a long tradition - that the 'real' bohemian has always just passed, by the time of writing it has become a performative spectacle or sold out to the mainstream.

But, as Wilson suggests, has it vanished - or has it just mutated or is it just located somewhere where people aren't looking?

Someday, no doubt, someone will be looking back at those vibrant subcultures of 2014 and lamenting their passing into the banal normality of the present moment.
Posted by Lesley Hall at 12:16 No comments:

Attack of the sex cliches and national stereotypes

There is a fairly lengthy piece in today's Guardian on the about-to-open Institute of Sexology exhibition at Wellcome Collection (I may have given some advice on specific aspects, but I was not involved in curating this, by the way). It doesn't entirely manage to escape a number of dodgy cliches and generalisations, in particular the one about Those Brits In The Past, so repressed.

So, not only do we get the idea that the nation of Havelock Ellis, Marie Stopes, a host of other sex reformers and educators, and pioneering organisations for birth control, abortion law reform, and marriage guidance, was locked into a 'saucy postcard view of sex': which presumably came after, rather than running in parallel with, that other cliche, 'hooked on cold showers and the pursuit of empire' (is there nothing in the exhibition on Sir Richard Burton, we ask ourselves? - pursing empire perhaps but not about the cold showers).

We also have the O Les Francais, so much more relaxed and sorted about L'Amour than les rosbifs of Olde Angleterre:

While it is entirely probable that in the corpus of C19th British smutty literature there may be found some text on 'The Joys of Frigging' or similar.

Indeed, while Marie Stopes was hymning the benefits of contraception as an essential adjunct to married love, the French government, beset by longstanding fears of population decline, actually made it illegal in 1920, and idealistic Malthusian anarchists were imprisoned for promoting birth control.

There's also the very common simplistic notion of who was liberal and who conservative. Krafft-Ebing may not look like a radical, and he wasn't, but he was a supporter of the campaign for the repeal of Paragraph 175, the German penal law on homosexuality, initiated by Magnus Hirchfeld.

It does, however, manage to eschew some of the usual suspects.
Posted by Lesley Hall at 10:42 No comments:

Further thoughts on the urban myths of sex

Musing further upon my post yesterday, and wondering about the endurance of these two narratives about sex in history, it occurred to me that they do have something in common.

They are both about posited attempts of a patriarchal system to exert control over women - in the case of the chastity belt, specifically husbands attempting to ensure the fidelity of wives, in the case of hysteria/vibrators, the notion of dealing with disruptively hysterical women by giving them a good seeing-to with a medically-approved and scientific device.

And both get subverted. Most tales involving chastity belts are about the woman managing to deceive her husband nonetheless, while the hysteria/vibrators narrative implies that women took a procedure intended to pacify them into appropriate womanly docility and turned this into private enjoyment with personal appliances.

This is a much more widely applicable gendered narrative of male desire to control and sly womanly subversions, with added sauciness. No wonder these have legs.
Posted by Lesley Hall at 10:23 No comments:

Urban myths and legends about the sexual past

I note some people claiming that they have seen Victorian vibrators in a museum and so it must be true. Except you can, really, label any old Victorian medical device as such, because, given the spread of the idea that these actually existed, people will take it on trust. I've personally been asked to testify that a certain Victorian medical object was a Victorian sex toy, when there was really very convincing evidence (such as the patent number attached to its base) that it was an electrotherapeutic device intended for rectal use (a use of electrotherapy which can be substantiated from contemporary medical texts - it was recommended for haemorrhoids and also for prostate problems). I feel that there are interesting and bizarre stories about Victorian medical practices which are rather depressingly being occluded by the desire to bend them to the hysteria/vibrator narrative.

The 'saw it in a museum' defence of some sexual urban myth is not a new one: in fact it's of some antiquity, being recorded by E J Dingwall in his classic work, The Girdle of Chastity (1931) apropos of chastity belts. He pointed out that although widely supposed to have been a medieval device, the examples he saw were no earlier than the Renaissance - and more recent scholarship suggests that even these may have been later forgeries. The curatorial comment on one of these items 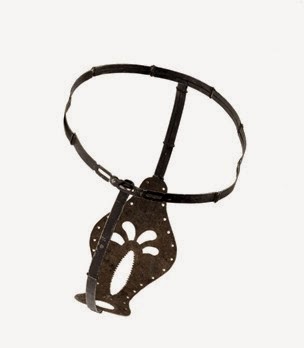 held in the British Museum remarks:


The evidence for their use in the Renaissance period, however, is largely anecdotal or in burlesque fiction. It is probable that the great majority of examples now existing were made in the eighteenth and nineteenth centuries as curiosities for the prurient, or as jokes for the tasteless.

But presumably there are still people going around with a vague belief that this was a thing that actually happened in the Middle Ages.
Posted by Lesley Hall at 20:45 No comments: