This very enjoyable event took place yesterday, brought together and efficiently organised by Jana Funke. It was an intense experience, covering a range of fields to which the neglected figure* of Havelock Ellis contributed. 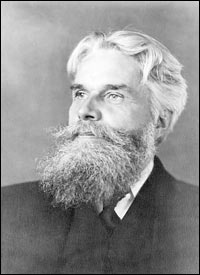 Eleven papers from a variety of disciplinary backgrounds made for a full, but very stimulating day, covering the various sources and influences for Ellis's own intellectual enterprises in criminology and sexology, his relations with and influence upon various individuals in his circles of friendship, his impact on contemporary writers on sexual matters, his relationship to modernism (through friendship with modernists, in his work as a literary critic emphasising the 'New Spirit' in literature, and in his impact upon modernist writers), his vision of transformed relationships and ways of being. Besides the papers and the lively discussion, conversations continued over coffee, lunch, tea and at the post-conference dinner.

There are moves afoot to consolidate the beginnings of yesterday's event in rescuing Ellis from the condescension of history and assumptions that he is of merely antiquarian interest, a curiosity marooned in historical byways, and recuperating him as a figure of significance the extent of which is only just beginning to be recognised.


*Just looking up Wikipedia links I discovered some significant errors in mentions of Ellis - he was never President of the Eugenics Society (I'm not sure he was even a member, not being a great joiner of associations) and he was certainly aware of his urination fetish well before the age of 60!
Posted by Lesley Hall at 21:29 No comments:

The infertile woman is a familiar figure in popular culture. Soap operas dramatise the tragedy of infertility, right-wing tabloids threaten career women with the horrors of involuntary childlessness, and the news media greets each new breakthrough in reproductive technology with a strange combination of celebration and dread at the potential Brave New World we are sleep-walking towards. This portrayal of a realm where science fiction threatens to spill over into fact adds to our sense of infertility as a peculiarly modern condition. Yet there is a longer history of involuntary childlessness – a history which stretches back to the Book of Genesis and beyond – as well as many different potential experiences of infertility according to nation, class, gender, and race.

This symposium will explore the history of infertility, and the place of infertility in science and culture. Our primary focus is historical, but we welcome contributions from scholars in different disciplines and employing a range of approaches – social scientific, literary, feminist, psychological, and legal. We aim to bring together researchers working on this fascinating and under-explored field in order to better understand historical and contemporary representations and experiences of infertility across different cultures and from different perspectives. Potential topics for papers include, but are not limited to:

An edited collection based on the presented papers is planned.

The symposium is co-convened by Gayle Davis (University of Edinburgh) and Tracey Loughran (Cardiff University). It will be held at the University of Edinburgh on 4-5 July 2013. Abstracts of 250 words, for papers of 20-30 minutes, should be sent to LoughranTL@cardiff.ac.uk by 25th January 2013.
Posted by Lesley Hall at 20:06 No comments:

I have sadly neglected this blog of late, what with the copy-editing, proofs, and index for the new edition of Sex, Gender and Social Change, writing a paper for a workshop on Havelock Ellis, being embroiled in a move of offices at work etc distracting my mind.

Among my posts on the Wellcome Library blog over the last several months:
Norway in archives and manuscripts
'I can think of nothing lovelier than owning cattle'
'If not duffers won't drown'
and one not by me, but posted by me on behalf of the project archivist:
National Abortion Campaign archives now available

Added to my forthcoming appearances: I shall be keynoting at the Women’s History Network, Midlands Region, Conference, 'Women and Science', University of Worcester, 10th November 2012

Cultural anxieties concerning biological reproduction often pivot around the notion of the non-reproductive body, in which intersecting fears about class, race, sexuality, gender and disability are encoded. Media discussions of abortion rates, teenage use of contraception, and gay marriage all register the perceived threat of sex without procreation. In a broader sense, the imperative to safeguard the future by ‘thinking of the children’ is powerful ideological currency, animating activists on both the left and the right.

A number of writers have responded to this tendency by considering the aesthetics and ethics of the non-reproductive. Recent work in cultural studies has emphasised the radical potential of the subject that refuses reproduction. In Unmarked: The Politics of Performance (1993), Peggy Phelan locates the radicalism of feminist performance art in its status as ‘representation without reproduction’. More recently, Lee Edelman’s No Future: Queer Theory and the Death Drive (2004) argues that resisting heternormativity entails refusing to participate in ‘the cult of the child’. According to Judith Halberstam (2008), Edelman’s work is part of an ‘anti-social turn’ in queer studies which ‘always lines up against women, domesticity and reproduction’.

Inspired by Halberstam’s intervention, this one-day interdisciplinary humanities symposium invites critical perspectives on the idea of non-reproduction. How is the assumption that the non-reproductive necessarily resists the dominant order undermined by right-wing strategies that seek to limit reproduction, such as forced sterilisation, 'population bomb' rhetoric, discriminatory welfare policies or the stigmatisation of single parents. Is it helpful to draw a conceptual opposition between the reproductive and the non-reproductive? Are there alternatives to this framework? What are the implications of ‘non-reproduction’ and anti-futurity for approaches to the archive and the preservation of cultural and social documents?

Contributions are welcome from graduate students and early career researchers across the arts and humanities, as well as thinkers, activists, writers and artists working outside academia.

Topics could include, but are not limited to:

• pro-choice politics versus reproductive justice
• global warming and population discourse
• Refusing parenthood in art and literature
• Infertility and IVF
• Contraception and abortion politics
• Queer theory and the family
• Gay marriage in the media
• Feminism and maternity
• Museums and heritage
• Textual repetition and reproduction
• Discourses about the child (e.g. the child as commodity)
• The disabled child and controversial sterilization procedures (eg. The Ashley Treatment)
• The politics of non-reproduction in an age of accumulation
• copyright law
• Gustav Metzger and destruction in art
• Derrida on the archive
• Performance theory

Abstracts of 250-300 words for 20-minute papers should be sent to non.reproduction@gmail.com by Monday 1 October.